Tap the Share button on the browser’s toolbar . Tap the Add to Home Screen icon in the Share menu.

Tap the menu button of your chrome browser and tap Add to homescreen.

Newly unclassified documents confirm that Chinese scientists smuggled deadly viruses from Canadian Lab to Wuhan Institute of Virology. I first spoke of this in March regarding this biological theft and espionage at Canadian lab NML. The shipment was sent just months before the Coronavirus outbreak by Chinese Scientist Dr. Xiangguo Qiu. 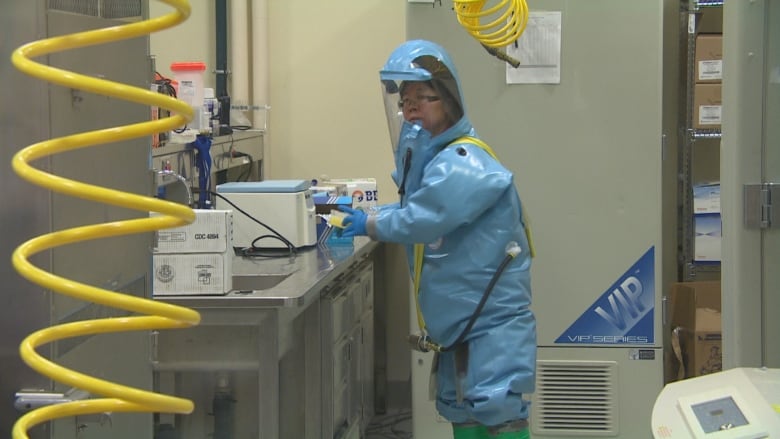 Canadian authorities are still are in denial about Qiu’s role in the shipment, although released documents mention her by name. The authorities are also downplaying the investigation, dubbing it an “administrative issue,” while heavily redacting crucial information citing national security laws. Dr. Qiu not only trained scientists at the Wuhan lab but also helped set it up, which is now under worldwide scrutiny as the epicenter of Coronavirus outbreak.

As I provided extensive details on Dr. Qiu and the goings-on at the NML and Wuhan in my report titled (China WUHAN Chernobyl EXPOSED)

Newly-released access-to-information documents have revealed how Chinese scientists smuggled deadly viruses from Canada’s National Microbiology to Wuhan Institute of Virology in China. The shipment was sent just months before the Coronavirus outbreak. Recent documents published by CBC News confirm my findings in the report China WUHAN Chernobyl EXPOSED that it was Dr. Xiangguo Qiu who sent these deadly viruses to Wuhan. 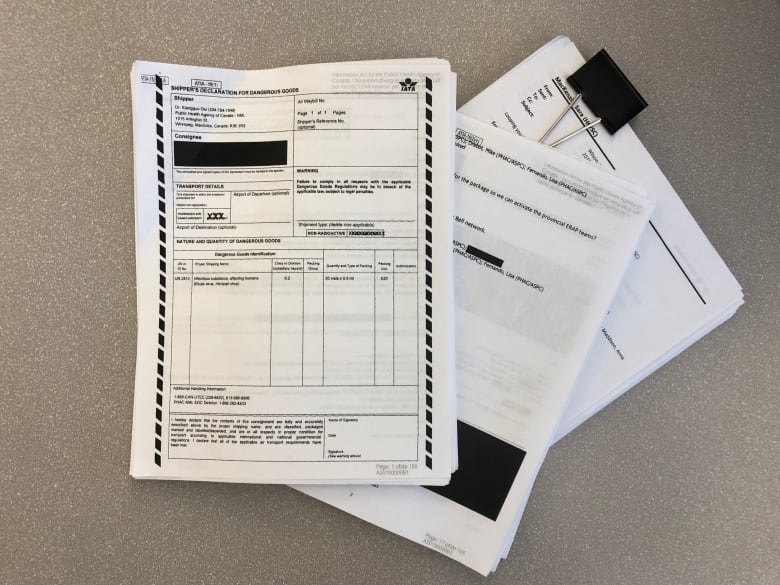 The Access to Information Act or the Privacy (ATIP) documents list the contents of the shipment, including two vials of 15 strains of the viruses (about 15 ml):

Canadian RCMP are still trying to establish Dr. Qiu’s motive in the theft and espionage of the material. NML insists it is just an administrative matter

The Public Health Agency of Canada (PHAC) initiated the RCMP investigation against Dr. Xiangguo Qiu, her husband, Dr. Keding Cheng, and the students from China has described their removal from Canada’s only level-4 Lab due to possible “policy breach.” PHAC said the shipment and Qiu’s removal from the Lab are not connected.

“The administrative investigation is not related to the shipment of virus samples to China. In response to a request from the Wuhan Institute of Virology for viral samples of Ebola and Henipah viruses, the Public Health Agency of Canada (PHAC) sent samples for the purpose of scientific research in 2019,”

Eric Morrissette, chief of media relations for Health Canada and the Public Health Agency of Canada, wrote in an email. Canadian authorities are still vague about Qiu’s role in the shipment, although released documents confirm her involvement by name. The PHAC officials are also downplaying the investigation, dubbing it an “administrative issue,” while heavily redacting crucial information citing national security laws.

Dr. Qiu not only trained scientists at the Wuhan lab but also helped set it up. Wuhan Institute of Virology is the same virology lab under worldwide scrutiny as the epicenter of the Coronavirus outbreak.

There are inconsistencies in statements from the NML, PHAC, and RCMP. Unclassified documents show otherwise. The ATIP documents provide details about concerns expressed by the NML’s director-general Matthew Gilmour in Winnipeg, and his superiors in Ottawa. Email communications mention Dr. Qiu by name, thanking her for sending the viruses to Chinese scientists.

In one email, Gilmour said Material Transfer Agreements would be required, “not generic ‘guarantees’ on the storage and usage.”

He also asked David Safronetz, chief of special pathogens: “Good to know that you trust this group. How did we get connected with them?”

Safronetz replied: “They are requesting material from us due to collaboration with Dr. Qiu.”

The “group” is officials from the Wuhan Institute of Virology.

The shipment was sent from the BSL-4, which on a Sunday evening when no transfer officials were present to confirm all paperwork and monitor the physical transfer of the shipment as is NML policy. The packages were routed from Winnipeg to Toronto and then to Beijing on a commercial Air Canada flight on Mar 31, 2019. The very next day, the recipients who were omitted from all documents replied that the package had arrived safely.

“We would like to express our sincere gratitude to you all for your continuous support, especially Dr. Qiu and Anders! Thanks a lot!! Looking forward to our further cooperation in the future,” said the heavily redacted email that does not provide the name of the sender.

Curiously, for just an “administrative issue,” essential documents regarding the case are redacted by Canadian authorities citing national security. Nearly one year after the expulsion of Qiu and her from the NML, there are still no updates on the case from the RCMP or PHAC keeping the exact role of Dr. Qiu, and her associates are still a mystery for people.

There is a push by a section of international and Canadian media to build a one-sided narrative regarding Dr. Xiangguo Qiu, completely ignoring her ties to the Chinese scientist military research laboratories. Various experts have raised questions on deadly experiments conducted by governments, specifically China, in secret and trying to cover it up now.

Dr. Xiangguo Qiu is a National Microbiology Laboratory scientist who was escorted out of the Canadian Lab along with her husband, another biologist, and four members of her research team.

Dr. Xiangguo Qiu is married to another Chinese scientist Dr. Keding Cheng – the couple is responsible for infiltrating Canada’s NML with Chinese agents as students from a range of Chinese scientific facilities linked to China’s Biological Warfare Program.

“It is suspicious. It is alarming. It is potentially life-threatening. We have a researcher who was removed by the RCMP from the highest security laboratory that Canada has for reasons that the government is unwilling to disclose. The intelligence remains secret. But what we know is that before she was removed, she sent one of the deadliest viruses on Earth, in multiple varieties to maximize the genetic diversity and maximize what experimenters in China could do with it. And this Lab has confirmed links to the Chinese military,”  said Amir Attaran, a law professor and epidemiologist at the University of Ottawa.

Dr. Qiu made at least five trips to China in 2017-18, including one to conduct training for scientists and technicians at China’s newly certified Wuhan BSL-4 lab. Dr. Qiu was invited to go to the Wuhan Institute of Virology at the Chinese Academy of Sciences twice a year for two years, for up to two weeks each time.

“This will be third-party funded, and therefore no cost to [the Public Health Agency of Canada],” say the documents, obtained through access to information requests. The identity of the third-party was again, redacted. During a Sept. 19-30, 2017, trip, she also met with collaborators in Beijing, the documents say, but their names have also been blacked out.

Many scientists at the Canadian NML say there have always been questions about Dr. Qiu’s trips to China — and what information and technology she was sharing with researchers there. They claim that the investigators have not interviewed critical people related to the case

“because senior management” has not made them accessible to RCMP or allowed staff to contact them with relevant information.

“It’s not right that she’s a Canadian government employee providing details of top-secret work and know-how to set up a high-containment lab for a foreign nation,” one NML employee said.

The Canadian National Microbiology Laboratory has been mired with controversy since the RCMP investigation began. Canadian scientist Frank Plummer who headed the NML, ended up dead a week after the RCMP investigation was made public. Plummer is associated with another critical individual related to my investigation, Dutch virologist Ron Fouchier. Known as the creator of the world’s deadliest virus, Fouchier also isolated the SARS Coronavirus and received it out of Saudi Arabia, which was then sent to Frank Plummer as I detailed in my extensive report on the (China WUHAN Chernobyl EXPOSED)

Dutch Virologist Ron Fouchier is a controversial figure Viroscience field; he has researched some of the world’s deadliest virus strains.

Last month another of NML’s directors Matthew Gilmour, who was involved in the shipment of deadly viruses with Dr. Qiu, resigned from his job “to take his family on a big adventure.”

Dr. Qiu has been under suspicion for smuggling deadly viruses and training Chinese scientists at the Wuhan Institute of Virology. The same Lab, which is now under scrutiny for conducting dangerous experiments with viruses which French intelligence warned earlier, could become the source of an outbreak from a potential leak.

These secret Chinese experiments, which I will detail later this week, were exposed by the Italian officials in 2015. Five years ago, Italian Rai, presented how Chinese scientists were conducting biological experiments on a SARS-like virus believed to be a Coronavirus, derived from bats and mice, asking whether it was worth the risk to “modify” the virus for compatibility with human organisms.

In closing, a vacuum of information is always a problem. This appears to be the case concerning Dr. Qui and the NML.

What you can read next